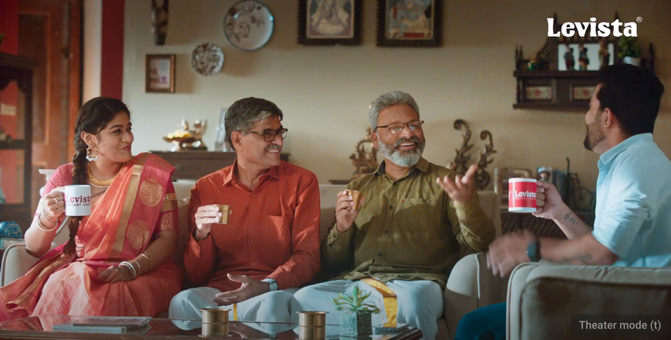 Levista Coffee has released a new TVC to celebrate the festival season. Commenting on the release of this TVC, Mr. S. Shriram, Vice President, Levista Coffee said, “We are excited to release our new TVC ahead of the upcoming festival season. We realized that fewer people are going to be visiting their family and friends this year. So, we reflected this aspect in our new ad by showcasing very less members in each frame, although the entire TVC is festive in nature and background. On the other hand, it seems that WFH is here to stay for a long time to come now and with no sight of even schools and colleges reopening anytime soon, we showcased that aspect succinctly in the script as well.”

Shriram added, “The key essence of this new TVC is that we wanted to ensure Levista is a part of the shopping list – be it weekly or monthly or even random and the advertisement makers captured this point quite well in the TVC. We have also made a special mention – verbal and visual, of our super tasty filter coffee, a first in our journey of 3 years”. Conceptualized and produced by renowned agency Happy Unicorn, Chennai, the new TVC once again has fresh faces and a bright background, shot at a beach house on ECR. The same team had earlier produced the previous set of CSK-Levista advertisements as well.

Levista has grown its offline presence by more than 60% and is now available through more than 40,000 points of sale across the states of Tamil Nadu and Karnataka. Other than this, the brand has strengthened its presence through national retail chains such as Metro Cash & Carry, More Retail, Spar Retail as well as localized players like Pothys, Saravana Stores, MK Retail, Namdharis, to name a few. Online, Levista has a strong presence on Big Basket and Amazon and is seeing great traction at Flipkart. In the past six months, Levista has seen a 2x – 3x leap in its online sales and has recently been on boarded on Udaan and Milkbasket.